Five 'Blots this evening, several regulars unavailable (Happy anniversary J & A). We chatted about Alisa's imminent and intriguing release, SWIFTWATER, and final work on back material, working with designer, and the million and one things to finalize a book.


Comment after last 'Blots: "To everyone that attended the last meeting, I'm certain that was some of the most helpful feedback I've gotten at a meeting, so thank you. As I work hard on a rewrite I'm discovering just how spot on the comments were. It's exciting to see tangible improvement."

Patrick shared some of his frustrations with being redemptive in his speculative fiction writing. Read Lewis and appreciate Aslan as a Christ figure and the redemptive objectives of his writing, but the need to go back to Scripture, to the source, for true redemption. How to weave good into tales and a genre that is often dark, bloody, and seemingly so unredemptive?

Two zombie sisters, Aza and Duplicity, who sound like they are country bumpkins. The girls grilled him about... but we don't hear them actually doing the grilling. Off to the movies, which Gabe had only seen on small screens, never before on the big screen at a theater. Sarb the name for zombies. Is this universally accepted or did Patrick invent Sarb. Inter-specie love and romance, made to sound quite common. I still think you are narrating conversations and reactions that we should be hearing and seeing. I love your embedded critic of Hollywood and movies. I would strongly suggest varying your narrative with protagonist's thoughts, conversations, and actions. Does Gabe have a mannerism that makes him real? I was then that I realized why there are zombies, to teach us about sin. Could he speculate about this rather than prescriptively states it? Or place it in a conversation. The narrative needs variation. Great content but better conveyed by placing it in conversation and action.

Sofia liked it but wondered if there needed to be more different from the humans they are going to the movies with, unique appearances, mannerisms, things that are normal in their world but not so in humans'. Rachel felt like there was too much past tense. Is the recalling of past scenes slowing the pace of the story?

Further is in the realm of ideas, as in, The further he thought about it, the more anxious he became. Farther is physical distance that could be measured.

Alisa wanted some 'Blots advice. She has several books going but is feeling weary of all of them, hit a wall. I asked Alisa which book she feels the most enthusiasm for, is most intrigued by. The Emblem 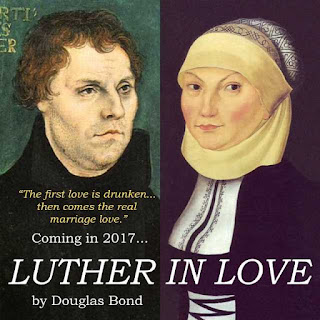 was the first thing she brought up. We started talking about story boarding or more loosely following the yarn where it leads you. Dickens was very meticulous and outlined the entire novel before he wrote it, whereas, O'Conner never wrote this way. Create an authentic character, plop them in an inciting and dangerous situation and hang onto your hat. Information bombs and history bombs, chapters that need to convey essential information but without stalling the pace, disconnecting the reader from the protagonist's problem.


I read a bit from my imminently forthcoming adult novel LUTHER IN LOVE. Inkblots members have helped me enormously on this biographical novel, especially the women members; they have helped me with the enormous task of writing from the point of view of a woman, something not so easy for a male author to do (I think female authors do this better than we men, generally speaking).

Labels: creative writing, inkblots, literary criticism, pen and ink, writing for an audience of one