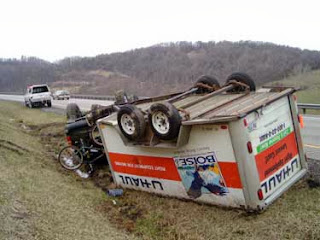 When we returned from France a few weeks ago, I felt sort of like a juggler who just tripped and lost track of all the balls he had in the air. Of course there were the various things that demanded attention at our home.There was the dishwasher melt down, three light fixtures that gave up the ghost, my computer hard drive wheezing and the monitor sneering at me but not doing what it is supposed to do, one-time lawn now looking more like amber waves of grain, the rose bush that had metamorphosed into a giant-tentacled monster enfolding the front yard in its grip, rigor mortis settling in on my garage door. All this while finalizing my manuscript on the Huguenots and preparing for another school year at the classical Christian high school where I teach.

I don't want to sound like I'm griping here. And I know that everyone else is busy too. But there were several other issues on top of these. All of which has left me musing and reflecting on life--and on sickness and dying.

For twelve years I have had the same tenant in a rental property of ours. We'll call him Perry. Perry always paid his rent in crisp one hundred dollar bills and he always delivered them to the door of my own home on the fifth of every month. He'd done this for twelve years, only missing two months when he had surgery on his knee and we carried him on the rent for two months until he could get on his feet again.

Perry lived a singularly focused life. He loved motor sports and everything related to auto racing. He was a collector of paraphernalia related to his passions, motor sports and drinking beer. He was a lonely old man in his sixties, who drove a beer truck for Miller and looked older than being in his sixties should look. He was overweight, diabetic and careless about his diet, which seemed to be dominated by beer, cigarettes, and ice cream sandwiches. He also had a fascination with Halloween, and had two caskets that he used for a spooky gig he would do at what appeared to be his favorite holiday of the year.

So when Perry missed bringing the rent over on September 5, I texted him and asked if everything was okay. A few minutes later he called me. "I'm really sorry," he began. "I should have given you notice, but my sister sent me some money and invited me to come live with her. I'm driving a U-Haul truck in Iowa right now. Hey, I'm going to pay you those two months rent, really I am." His final words were, "I'm really sorry, Doug. Really, I am."

So now, on top of the other balls I was desperately trying to get back in the air, I had a four-bedroom house to clean paint and prepare for another renter--and it needed a new roof, and a few other more major upgrades wouldn't hurt too.

Next day, my ten-year old helped me with the first of a number of loads to the dump or thrift store. We had no sooner loaded my pick up truck and a car pulled in the driveway. An official looking man stepped out of the car--the police chaplain. "I have some bad news for you," he began. He went on to tell me that the Missouri State Police had just contacted the Tacoma Police department trying to trace down next of kin. Perry, my tenant, had a cardiac arrest at the wheel and rolled the U-Haul truck with all his worldly goods in it. He was dead. My ten-year-old listened wide-eyed. I had just talked to him eighteen hours before. I didn't even know his sister's name or what state she lived in.

I've thought of little else since. Sure, I had tried to share Christ with him a couple of times... in twelve years (now there's passion for the lost for you). Now he is dead, unsaved, lost, empty. His last number of years he had lived in poor health, his diabetes leading to complications that just about left him without a leg. And all the comfort he found was in watching motor sports on TV and drinking beer. In exchange for a roof over his head, I took his money, but for the most part I didn't love my neighbor with the gospel anything like I ought to and now so wish I had done.

As I spend most evenings after work and all day Saturday cleaning, painting, repairing plumbing, upgrading windows, and the million and one other things that require attention in a house built in 1904, I can't stop thinking about Perry and his empty life, now gone and over. The Psalmist prayed that God would "Teach us to number our days aright and thereby gain a heart of wisdom." As near as I can tell, Perry had not numbered his days aright--and now they were over. Perry had concocted a pseudo-comfort theology whose liturgy was the roar of race car engines and whose sacramental food was beer and cigarettes, but it was built around the wrong god. When we number our days aright, we realize that scratching where it itches in this life always leads us astray, and is inevitably an expression of our rebellion against the living and true God. Since we were never meant to worship the wrong god, when we do nothing in this life works in any enduring way; eventually false worship catches up with us. Aside from the gnashing eternal consequences, one of the more obvious temporal ways is in the total emptiness of life lived running after other gods. It is not hyperbole to say that life is "Meaningless, meaningless, all is meaningless," when we shove Jesus aside and enthrone anything else in his place.

I may be tempted to think that the tragedy in Perry's life was that he didn't have sophisticated enough toys, tastes, and entertainments--if only he'd drank micro-brew or fine French wine and smoked expensive cigars it wouldn't have been so empty. You think? Karl Marx was right about perhaps only one element of his destructive theory: religion is an opiate of the masses. What Marx didn't realize is that we're all religious, we're all worshipers, Marx included. And in our fallen nature we all worship the wrong god(s). And hence so many of us are like Perry, living our lives in folly and emptiness, genuflecting in the wrong direction, our backs squarely against the King of kings, Jesus the Christ.

I feel profoundly sad to think that probably no one would go to Perry's funeral. Then again, there was no funeral. He was 1,500 miles from where he had lived and worked; he had no wife or children; he had no money or prepaid burial plot; the sum of his worldly goods were in the back of the U-Haul. After the state police cleaned up the highway mess, a few dollars in public Missouri State funds were no doubt allocated to cremate his body and incinerate his memory from the world.

Now I sweat away with my paint roller in the house Perry lived in for twelve years musing on an empty miss-spent life, and on the various ways I can be just like him--not numbering my days, a heart full of folly, chasing after other gods. Humanly speaking, by my indifference, Perry missed the only comfort in life, and now in death and in the afterlife...

1. Q. What is your only comfort in life and death?
A. That I, with body and soul, both in life and death, am not my own, but belong unto my faithful Savior Jesus Christ; who with his precious blood has fully satisfied for all my sins, and delivered me from all the power of the devil; and so preserves me that without the will of my heavenly Father not a hair can fall from my head; yea, that all things must be subservient to my salvation, wherefore by his Holy Spirit he also assures me of eternal life, and makes me heartily willing and ready, henceforth, to live unto him

World War II and the Bikini 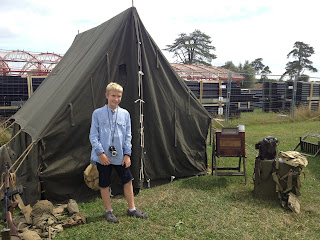 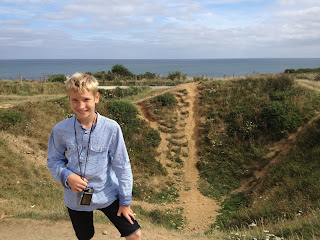 While in France this summer researching and writing on the Huguenots, we spent a week in Caen (also an important Huguenot site) exploring WW II history and D-Day, Giles' particular passion. He references everything in the context of WW II. Our first visit to the beach at La Ciatot, warm Mediterranean seaside environment on all sides, he looked out on all the sunbathers and said, "Did you know that the French invented the bikini? After WW II there was a really big fabric shortage so they came up with that." In fact, he was partially correct, though it was the French testing nuclear weapons on the Bikini Islands after WW II that led to the invention.
The following are clips of Giles (10) explaining what happened in WW II at various beaches, bunkers, and museums in Normandy. He really loves this history, and has spent the months before our travels reading everything he could get his hands on about D-Day and WW II.

Giles explaining what happened on D-Day at Omaha Beach:


Giles explaining what happened on D-Day at Pegasus Bridge:

Giles explaining what happened on D-Day at the German cemetery near Pont du Hoc:

Giles explaining what happened on D-Day at Gold Beach:


Giles explaining what happened on D-Day at the Mulberry Harbors:

Giles explaining what happened on D-Day with tanks:


Giles explaining what happened on D-Day... (a few more coming)

Posted by Douglas Bond at 12:40 PM No comments: