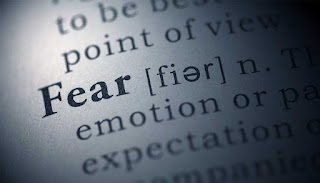 "We're going on a bear hunt. We're not scared," reads the charming, safe-scary children's board book. Forget bear hunting; the fact is, most of us are scared--afraid--a good deal of the time.  I'd like to pound my chest and tell you that I am never afraid. O, I used to be when I was a little 'fraidy-cat kid and didn't know any better, but now that I'm a grown man, I've conquered my childish fears and march unafraid into the fray. But it would be a lie. A pretty big one. I turned fifty-nine in 2017, and I've been calling my hair "premature" gray (now very much, white) for a number of years. My wife informs me it's well past time to drop the adjective. Birthdays are supposed to be happy occasions, but they have aging lurking menacingly in the shadows. Human beings are afraid of aging. The more honest ones admit it.

Since my untimely (humanly speaking) termination from decades of teaching (I was replaced by two people, neither with gray hair), I've found that in my flesh I am a very timorous person, fleeing when no one is pursuing, yet fleeing, nevertheless--running scared. It doesn't reveal itself in trembling lip, and constant glancing over my shoulder, not literally. But there are plenty of the internal tremblings, anxieties, uncertainties, worries, hand wringing, the tossing-and-turnings of raw fear on sleepless nights. And sometimes it begets impatience, frustration, even anger, which, like Spenser's Dragon Error, feeds on its own offspring and produces more of the same--Fear.

"No one ever told me that grief felt so like fear," wrote CS Lewis in the opening lines of A Grief Observed, penned after the death of his wife in 1960, just three years before his own death. Lewis got so many things right, especially when we take into account that he had no formal theological training, and he didn't even have Ligonier and the ministry of the late RC Sproul "to bridge the gap between Sunday School and seminary." But someone did tell him about fear. God did. "Fear not," is the most ubiquitous imperative in the Word of God. Why? Because fear is the universal result of sin and the curse. It clutches at the innards of everybody. "The day you eat thereof, you shall surely die." And death, philosophy's great problem, terrifies all of us. "But timorous mortals start and shrink.../And fear to launch away," as Isaac Watts put it.

What a happy thought for the New Year! Well, in an important sense it is a happy one. Owning our sin and its just consequence, death and fear of death, is the first principle of abandoning all hope in solving the problem on our own hook. There is no solving it apart from God.  "God is our refuge and strength, a very present help in trouble," wrote the Psalmist (46:1). Because God chose to make his habitation with us, in the incarnation, to be tempted in every way, like we are--including tempted to raw fear of suffering and death--because God in Christ is our ever-present help.,"Therefore we will not fear..." (46:2).

Just as there is the Grand Exchange of my sin and guilt imputed to Christ on the cross, and His perfect obedience imputed to my account, making me forensically righteous before His holy Father, there is in the Good News an exchange of fear. "Fear not, O little flock the foe/ That madly seeks your overthrow./Dread not his rage and power," wrote German hymn writer Johann Altenburg. In Christ, my Mighty Fortress, fear of man in all its pernicious forms fades away. And in its place comes right fear of God.

"The fear of the Lord is the beginning of wisdom, and knowledge of the Holy One is understanding" (Proverbs 9:10). Right knowledge of ourselves as sinners before a Holy God who is justly angry with us for our sins produces the leading edge of right fear of God. God is good and we are not, so we fall down in terror and repent, crying to him for mercy. And then he purges us with the burning coal of true forgiveness. Then filled with grateful awe, we worship, we adore, we trust, we feed on, we live for, and, by grace alone, obey the glorious God who has stooped to rescue us from sin and death--and fear.

I've never attempted to write a hymn on the theme of the fear of God before, but while reading through Proverbs and Table Talk for January 2018, I managed to write a hymn on the gracious blessing of fearing God, progressing, stanza-by-stanza, from the man, the woman, the sons, the daughters, the home, and the church that fears the Lord. My hope is that you will be blessed meditating on this important biblical theme with me. "How blessed is the man who fears the Lord... His heart is steady; he will not be afraid" (Psalm 112:1,8).


How blessed the man who fears the Lord!


Who daily feeds upon his Word,


And falls down at the mercy seat,


And casts his fears at Jesus’s feet.


How blessed is she who fears the Lord!


Delighting, trusting in his Word:


She fears no danger, threat, or harm


While resting safe in Jesus’ arms.


How blessed are sons who fear the Lord!


Who hear and heed the Spirit’s Word.


No tyrant’s heel can hurt them here


Since they the Sovereign Lord revere.


How blessed when daughters fear the Lord!


Disease and dying hold no fear


Since Christ who conquered death is near.


How blessed the home that fears the Lord!


How blessed the church that fears the Lord!

Her Savior's work, her sure reward;

And bows in awe at Jesus' feet.